The implementation of agricultural insurance (BHNN) in the livestock sector, is important in creating stability in livestock, helping farmers reduce losses caused by natural disasters, epidemics ... Owner This is the case, but in a locality considered the "capital" of the livestock industry in Dong Nai province, farmers in general are still indifferent to BHNN. 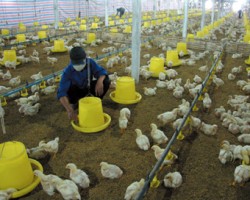 Implementing Decision No. 315 of the Prime Minister on the pilot implementation of agricultural insurance (BHNN) in the period of 2011 - 2013, Dong Nai is one of 20 provinces and cities in the country selected to pilot insurance Applicable to pets including buffaloes, cows, pigs and poultry. Currently the province is piloting in 9 communes in 3 districts of Tan Phu, Dinh Quan and Xuan Loc.

The reason Dong Nai focuses on livestock insurance is because this is the locality with the strongest breeding in the country. Currently, Dong Nai has the largest herd of pigs in the country with the number of about 1.2 million, of which farm livestock accounts for 60%, the rest is small livestock with the number of heads / herd of 100 or less. . The province also has poultry herds of about 9 million (of which over 1 million laying hens). Every year, Dong Nai poultry herd provides about 42,000 tons of meat and 600 million eggs.

On April 1, 2012, there were 5,280 households in Dong Nai, of which 328 poor households, 648 households near poor were selected to pilot the implementation of state insurance. In addition, there are 129 farms with a total of livestock and poultry being deployed with state budget with over 1.4 million children. However, through the evaluation and survey of households capable of participating in agricultural insurance, Dong Nai province said that the number of households and farms that can participate in only accounted for about 20% of the selected households at 3 district on. Why so?

The first reason is because farmers think that the premium is too high. For example, every pig must pay a premium of VND 120,000. Hearing this fee, pig farm owners in Dong Nai shook their heads immediately, because pig production costs are now quite high. Even if live hog prices are at a level that benefits farmers, it is difficult to persuade farm owners to buy insurance. Because looking back at pig breeding in Dong Nai in particular and the country in general in the past years, it will be seen, except when the price of pork is abnormally high such as the beginning and middle of 2011, normally, pig farmers only The profit is about several hundred thousand dong per head, so the insurance fee is up to 120,000 VND / pig, even if it is supported by the State 20%, who dare to say it is low? Many pig farm owners in Dong Nai say that they have invested in a good way. implementing strict measures in disease prevention, so the possibility of risk is very low. Each growout cycle is short, so it is not time to spend money to buy insurance.

The fee is high, there is no distinction of fees for commercial breeding with breeding. By commercial farming, with pigs, each cycle is only about 3 months, chickens and about 2.5-3 months. Meanwhile the breeding cycle has a much longer time. This has caused breeding farms not to be interested in livestock insurance.

On the other hand, in livestock insurance regulations, there are still some points that make farmers feel hesitant. For example, when participating in insurance, the farm owner must be vaccinated according to regulations, causing the cost of the farmer to be up. If the output is stable, farmers will not "freak out" much with this regulation. But when the price of pigs and chickens keeps increasing and decreasing, making farmers often "hairless" with the problem of loss - profit, so even knowing that vaccination is correct, many households are still available skip. Or if the epidemic happens, when the competent authority announces the epidemic, the farmer will be compensated for the insurance. But from the time of detection of the epidemic to the time of publication, it will take a long time, so will the animals get sick before the announcement of the epidemic?

Mr. Nguyen Tri Cong, Chairman of Dong Nai Livestock Association, said that in fact, farmers still do not fully understand the state insurance. Meanwhile, the provisions for livestock production and the responsibility between participants and insurance agencies are too many and complex, making farmers less interested in participating.

Therefore, in order to attract the interest and response of farmers to the state budget, the Ministry of Finance needs to rebuild the fee schedule for each farming object in the direction of calculating the raising cycle to encourage farmers to take part family; specifying the compensation for insurance related to the time of publication of the epidemic, and at the same time redefining the level of exemption for small-scale livestock households in the direction of being beneficial, reducing the losses to farmers when natural disasters occur. sick.