Diệp Quân 12/07/2019 0 Comments
Bullish Harami model (Mother cradling baby) is a cluster of 2 reversing candles that are easy to identify. This candlestick pattern gives a moderate strong signal but offers a very good risk / reward ratio when entering the order. This model appears relatively frequently on the forex market at different time frames. So if you know how to use them, you can create effective trading opportunities.


What is the Bullish Harami model?

Bullish Harami (Mother cradling a child) is a basic Japanese candlestick pattern, consisting of 2 candles, the first candle falls long, covering the second rising candle, similar to the image of a mother holding a baby. The pattern usually appears in a downtrend and gives bullish signals.
For price action traders, sometimes they call this model Inside Bar.
In addition, the model that contrasts with the Bullish Harami is the Bearish Harami, which is also considered an error version of the model Dark Cloud Cover. 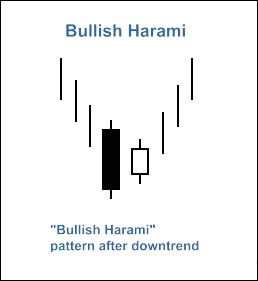 In forex market, Bullish Harami model must have all the following characteristics:
So you need to remember that Bullish Harami appears at the end of the downtrend, with 2 candles, the first candle is down, the second is bullish but the height is short. Bullish Harami indicates that the market has started struggling and is likely to end a downtrend. This pattern is not as strong as typical reversal candles like Bullish Engulfing, but the reliability of Bullish Harami is also moderate.

The Japanese believe that when the downtrend has lasted for some time, the market will become more careful and cautious before going down.
In the Bullish Harami pattern, the first candle with a very long body shows a strong decline. However, in the next session, the market struggled when the price went within a narrow range. The seller is temporarily no longer overwhelming the buyer as before, caution has appeared.
However, it is necessary to observe further developments to determine whether the price has reversed or is only a temporary pause before continuing the trend.

Here is an example of Bullish Harami in practice. On this chart, we can see that the market is initially declining at a quite steep slope. After that, GBPUSD went sideways for about 20 sessions before continuing to break down another beat with 2 very long red candles.
It seems that the British pound will be dumped after that development. But no, in the next session, the price created a green candle with a small body, contained in the previous candle. Bullish Harami pattern is created, the downtrend ends and the market reverses to bullish. 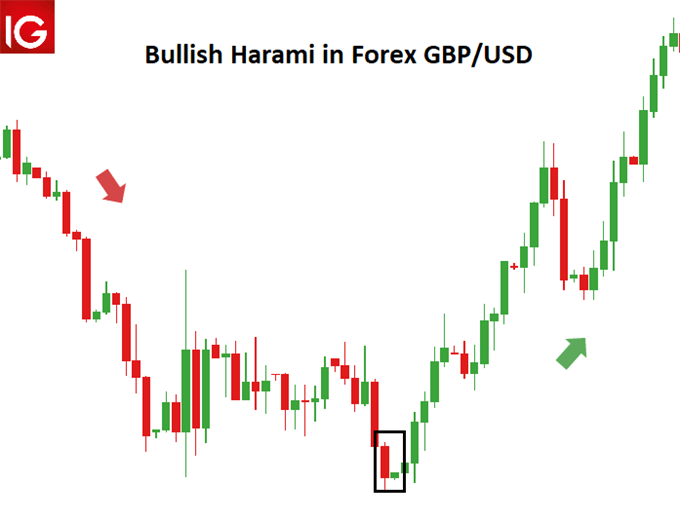 As mentioned before, the signal of Bullish Harami model is only moderate. Therefore, to increase the probability of winning, you need to incorporate some other factors, such as using the RSI indicator to see if the market is oversold.
If there is a support factor, the entry point to the buy order will be above the second beard about 1-2 pips. Why? Because the signal is not too strong, we need the market to go up to confirm the trend. If you rush to place an order as soon as the candle closes, you will probably be "betrayed" in a timely manner if the price refuses to reverse and continues to drop again. 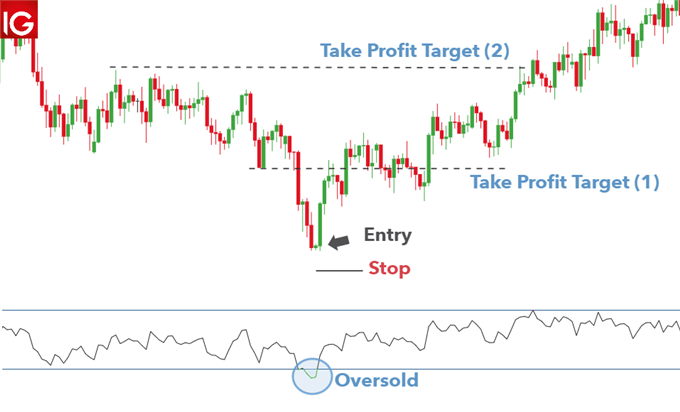 In the illustration above, the Bullish Harami pattern appeared when the market entered the oversold area. This is a signal to allow buy orders. Stop loss should be placed below the newly created bottom. The advantage here is that our stop loss level is quite short, so to avoid the market from being jammed in the short term, you can set the stop loss a few pips from the bottom, as the example illustrated above.

As Bullish Harami appears at the beginning of an uptrend, profit taking is likely to be set quite far. To be on the safe side, you should divide your profit taking into two parts and place them on previous resistance levels, or peaks.

Author: Tin Nguyen
Do not forget Prefer and Share This article will you do?
Tags
Bullish candle fast Harami pattern
Related Article