Diệp Quân 12/10/2019 0 Comments
Spinning Top pattern (Rotation) is part of the Japanese candlestick pattern. Spinning Top represents a lack of assertiveness in the market and provides valuable supportive information for trading strategies. In this article, we will show you how to identify a model, differentiating Spinning Top and Doji, along with trading instructions and practical examples.


What is Spinning Top? 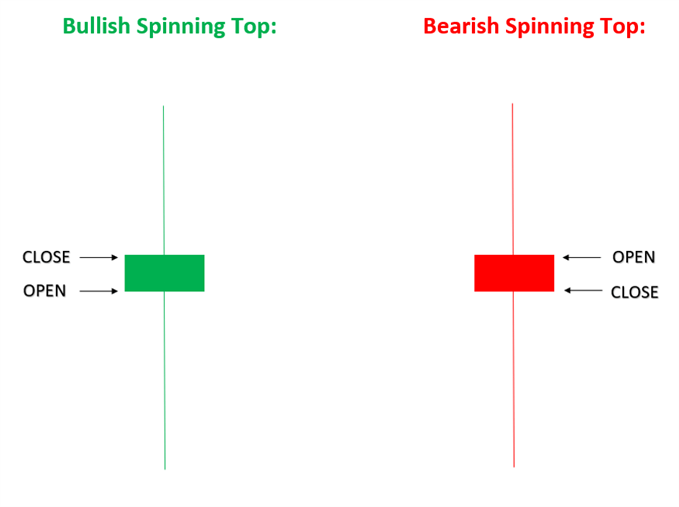 The Spinning Top is simply a candle with a small body and 2 long antennae, normally 2 candles will symmetrically create a shape like a spinning top. This pattern can appear in an up or down trend.
When this model was created, it showed that the market was in balance and neither side (the bulls or the bears) could control the situation. However, the trading signal that it gives is not clear and cannot be based on that to make a decision.


Features of Spinning Top and the difference compared to Doji

Characterized by its short body and long shadow, the Spinning Top model is easy to be confused with Doji and Long-tailed Doji, but here is the difference:
In addition, if we extend the Spinning Top candle body to longer, we get a new pattern called High Wave. You can see the illustration below to better understand these differences. 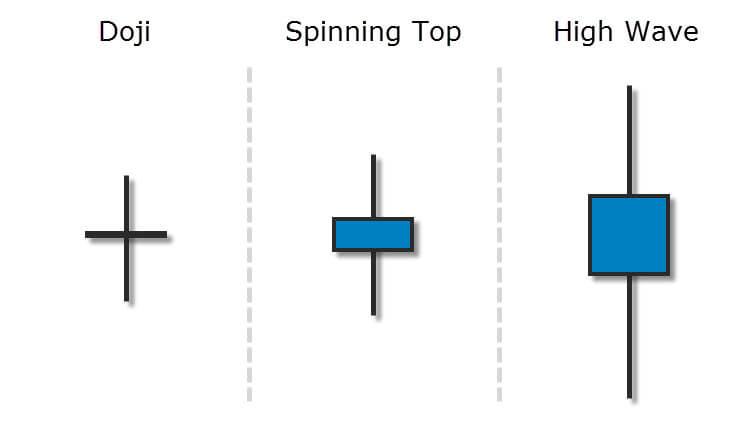 Actually, the key of this model does not lie in the color of candles. Red candles are not sure for bearish signals, green candles are not necessarily for green signals. We consider the following two examples
Below is a picture of a blue Spinning Top candle, which can create bearish reversals if they appear at resistance and can create bullish reversals if they appear at resistance.

The red candle shown below has the same effect, reversing down at the overhead resistance and reversing up at the lower support.

Therefore, the direction and color of the Spinning Top candle is not as important as the area where it appears.

Psychological movements of the Spinning Top model showed indecision, reflected through the long upper and lower shadows. The bulls pushed prices higher, then the sellers pushed the price deep down, but in the end it closed near the opening.
This hesitation may signal a weakening trend and the market is likely to move sideways. It can also signal a probable price reversal if it occurs after an up or down if it occurs in strong support and resistance areas.

In fact, it is very difficult and a bit risky if we only enter the order with a single candle but give a weak signal like a Spinning Top candle. When you trade only using Spinning Top without regard to the other factors, if you win, it is only by luck. We need sustained stability instead of momentary luck.
Spinning Top points out that in the current market, neither side has control over the situation and the buying and selling forces are in balance. Because of this, we should consider Spinning Top as an additional factor when performing a trend analysis. You can look for trading opportunities based on the following tactics:
You should also pay attention to the movement of a confirmation candle, which appears right after the Spinning Top candle.

To help you better understand the Spinning Top candle, we have collected an example as below. This is the EURNZD chart on D1 time frame.
EURNZD initially went in an uptrend, as indicated by the yellow trendline. Spinning Top candles with short body and long tail appear right at the top of the trend. As you can see, by the time the Spinning Candle appears, the stochastic indicator has entered the overbought zone. Next, the adjacent candle after the Spinning Top is a bearish candle, in favor of a trend reversal. The market has turned up to retest the top but failed and turned to the downtrend.

Spinning Top is a long tail candle, short body but larger than the Doji candle. The Spinning Top candle shows that the market is in balance, this model needs to be combined with other analysis to be more effective. Good luck!
You have just read the article: "Spinning Tops candlestick pattern"

Author: Tin Nguyen
Do not forget Prefer and Share This article will you do?
Tags
Candlestick fast pattern Spinning Tops
Related Article