Diệp Quân 12/08/2019 0 Comments
Inverted Hammer (Inverted Hammer) is one of the four very famous single candles of Hammer beside Hammer, Shooting Star and Hanging Man. This is a reversal pattern, appearing a lot on the price charts. Therefore, you need to understand the characteristics and usage of them to be able to make an accurate decision when caught.


What is the Inverted Hammer?

The Inverted Hammer is a candle with a short body and a long shadow pointing upwards, indicating a reversal of the trend from down to up.
Featuring a long upper shadow, this pattern shows that the bulls have sought to push prices higher. This move will be further verified based on subsequent price action. 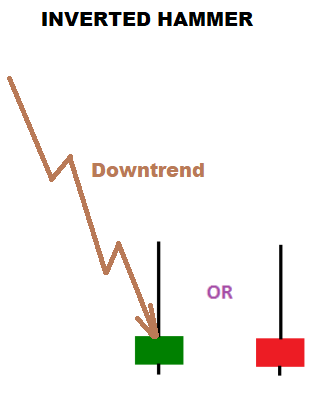 Many traders when learning about Japanese candles often confuse the Inverted Hammer candles and Shooting Star candles because their shapes are no different. But you need to remember that the Shooting Star candle appears at the top of the uptrend while the Reverse Hammer pattern is created in the downtrend.

An Inverted Hammer candle pattern will have the following characteristics:
The Inverted Hammer shows a bullish reversal signal, this pattern is usually not used individually but needs to combine at least one more candle after that.
If you've known the Hammer model, you might be surprised to see that both the Hammer and Inverted Hammer models give bullish reversals even though they are completely opposite. Contrary to what the name implies, a candle tails downwards, a candle holds the tail up. However, with the psychological happenings behind, both models actually showed bullish signals. Of course their reliability and usage will vary.

Below is an example of a model on the daily chart of the USDX index. After a long string of red body candles, the market moved towards the support area and created an Inverted Hammer candle, followed by a Doji candle, both of which showed reversal signals. 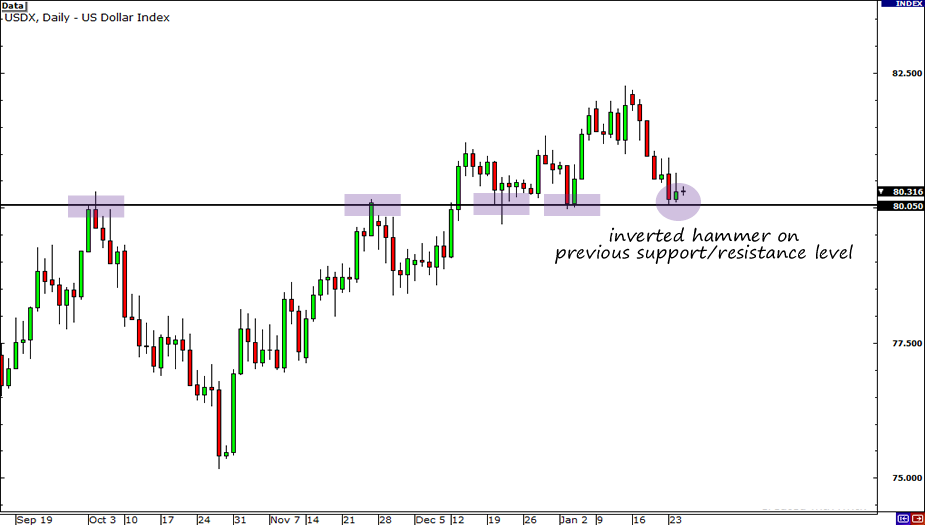 In a downtrend, prices are continuously pushed lower. When the buyer has enough energy, they push the price higher for a short time. Buyers use all their energy to make prices as high as possible. This action creates a long shadow.
However, the increase did not sustain long, the market returned near the opening level. Besides, the short lower shadow showed that the price could not penetrate too deep due to the strong defensive force of the buyers. The Inverted Hammer model shows that the market has begun to explore the above price level and wants to raise the potential price.
The market tried but failed the first time. Therefore, when dealing with the Inverted Hammer candle, we need to wait for at least one more confirmation signal.

The Inverted Hammer model works better when it occurs in strong support areas. And you should only trade in such areas if you do not want to bear high risks. Ignoring a signal that is not strong to wait for the next pattern to appear is not unusual at all because the opportunities in the market are numerous, they just test your patience.
When the market is in a downtrend, heading towards the support area and creating the Inverted Hammer candle, we can enter the following command:
Below is an illustrative example on the GBPUSD currency pair. The pair fell and rebounded several times before creating a support area. When the Inverted Hammer candle appeared near this zone, followed by another bullish candle, the market reversed and rose sharply. 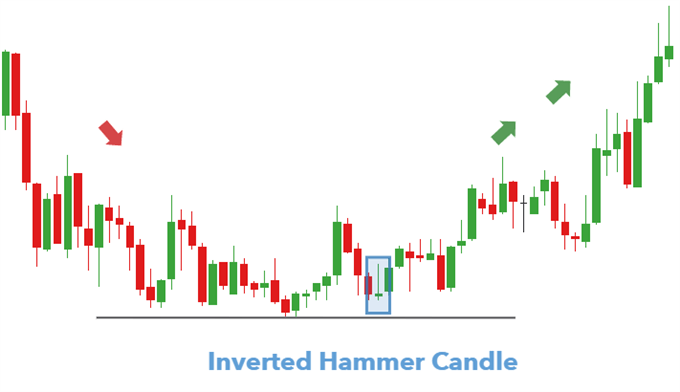 One way to use Inverted Hammer which is trusted by professional traders is to combine with Fibonacci tool. The steps are as follows:
Below is an example of how to enter this command. Fibonacci thresholds are created using the bottoms and peaks of the previous bull run. When the market fell and headed towards the 38.2% Fib retracement area, an Inverted Hammer candle was created. We use the pending order to enter. If the price goes up, the order will match. If the price continues to fall, the order does not match and you will avoid a bad trade.

The Inverted Hammer is a very popular single-candle pattern. This model has obvious advantages, attractive entry points. The downside of the Inverted Hammer is that it is necessary to wait for further confirmation as well as a reversal that can be temporary and not lasting.
You have just read the article: "Inverted Hammer candle model - Hammerback"

Author: Tin Nguyen
Do not forget Prefer and Share This article will you do?
Tags
Candlestick fast Hammer Inverted pattern Reverse
Related Article