Diệp Quân 12/09/2019 0 Comments
Piercing Pattern (Sharp lines) is the opposite of the Dark Cloud Cover. This is a group of 2 candles often appearing at the bottom of a downtrend, before the market reverses to go up. This model appears quite often on charts so you should master the identities, understand the models and know how to deal with them to create more profitable opportunities in the market.


What is Piercing Pattern? 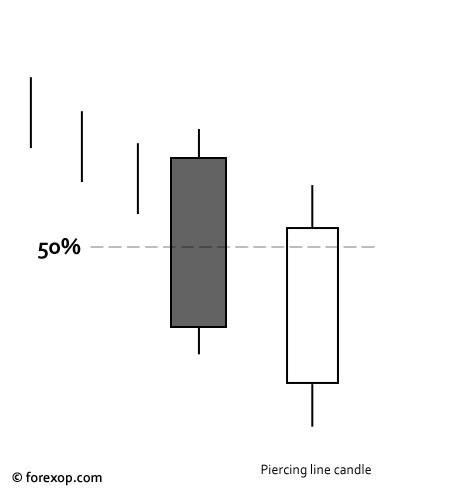 The Piercing Pattern appears at the bottom of a downtrend, created by a long downward candlestick, followed by an upturn candlestick.
From the illustration below, it's easy to see that if you put these two candles together, you will get a Hammer pattern, which is also a very popular single reversal candle pattern. 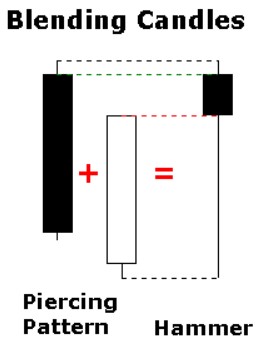 Piercing Pattern does not give a strong signal as some other models such as Bullish Engulfing. Therefore, when using this model, traders need to keep in mind the following factors in order to increase the probability of success:


Psychological evolution of the Piercing Pattern

The Piercing Pattern is created by the following psychological developments:
The market is going down and continues to plummet, the sellers with excitement created a very long body candle and brought the price down to a new area, it seems that the buyers are in a passive position.
However, after that, the price suddenly encountered resistance in the opposite direction, pushing the price quite far, higher than the first half of the candle. The market rejected the previous price and saw that the buyers were back in control.
When Piercing Pattern appeared, the outsiders would start to hesitate and ask whether the selling is still strong enough to continue the downtrend. Meanwhile, traders who have entered the previous sell order will feel confused when the price suddenly goes up, causing losses.

As mentioned, Piercing Pattern is moderately strong so it is hard to rely on this single model to trade. The smart strategy here is to combine it with other technical indicators to identify the oversold zone, the support or look for diverging signals. Besides, we need to observe the whole market to assess the situation, not just look at a single candle. We will have an example below.

After adding the supporting elements, we have two ways to enter the command for the Piercing Pattern pattern. The first way is to enter the order as soon as the second candle of the pattern ends. The second way is to patiently wait for another candle, if this candle continues to rise and break through the first candle. The second way to enter the command will be safer and more sure, but the Risk / Reward ratio will not be attractive by entering the first command.
The illustration above shows the Piercing Pattern candle cluster on the daily chart of the EURUSD pair. As you can see, the pattern appeared at the same time the RSI entered the oversold area. We enter the order as soon as the blue candle completes.

Studies have shown that the Piercing Pattern pattern will often be broken if the bottom of the pattern is broken, so we can place a stop cut just below the bottom just created. Profit-taking points will be set at the above supports.

Piercing Pattern is a reversal candlestick pattern similar to Bullish Engulfing but weaker in strength. This pattern appears at the end of a downtrend and the early stage of an uptrend should have a very attractive Risk / Reward ratio when entering the order. However, to increase the probability of success when trading, we need to combine the use of other technical indicators or analysis of support / resistance areas, depending on the state of the market is trending. or moving within a transaction range.
You have just read the article: "Piercing Pattern - Candlestick Pattern"

Author: Tin Nguyen
Do not forget Prefer and Share This article will you do?
Tags
candle Candlestick fast pattern Piercing
Related Article